What a fun day.

While preparing for our RI workshops next week we have been receiving the props for the 3D projections. A little bit too excited; who knew polystyrene could be so fun! They are enormous but full of awesomeness. Tomorrow we will be spending the day testing the projections in daylight. We will be using video footage from arrastre. For added Saturday workday fun we will be supported with the background sounds coming from Pride Festival.

We also featured in the Argus paper. The article is about Brighton Digital Festival 2015 which talks about the ballet [data]storm. We are described as a dance group but we are really a creative computer science education organisation :) I suppose when you do things that are a little off the wall it is hard to describe in a few words. The featured image is [arra]stre from last years Brighton Digital Festival. 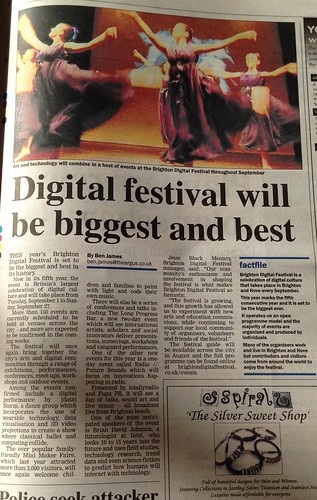